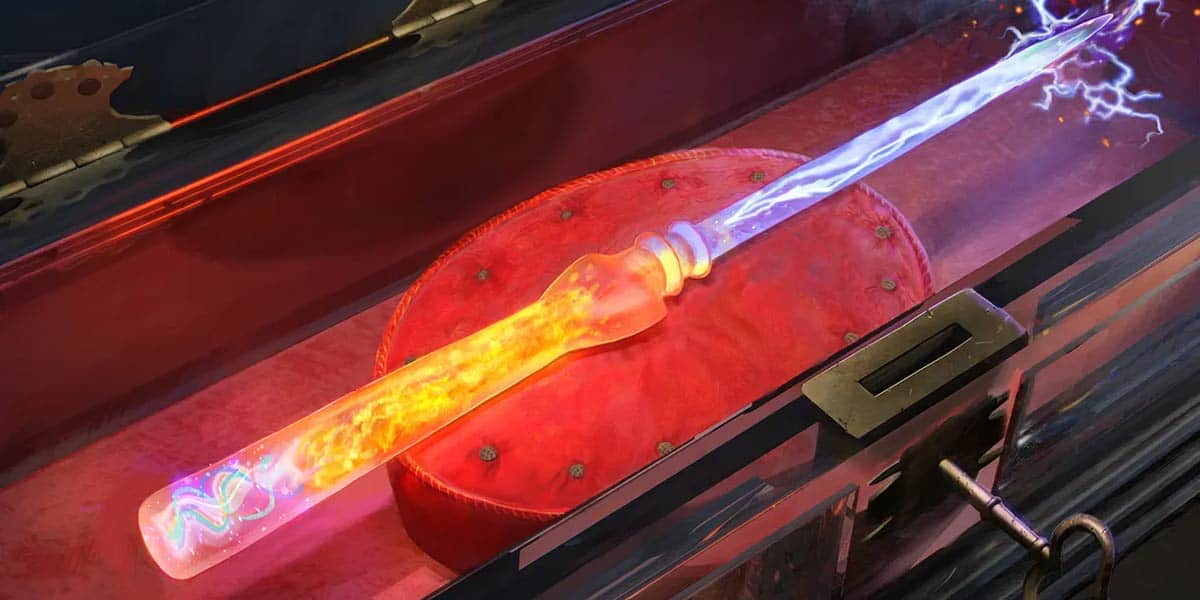 Wands are magical artifacts used in almost any fantasy setting, and D&D (Dragons and Dungeons) isn’t any different. D&D 5e, or the Dragon and Dungeons 5th edition, has a long list of wands that can be used in games. Wands in D&D 5e can be used without disrupting the long-term game balance, although some wands can be very powerful and overpowered.

The addition of 5e wands in the game can make it more interesting and sometimes completely turn the tide of the game. Dungeon Masters can be nudged to add wands to make the game more interesting and make the players use resources to acquire wands. Adding to that, Dungeon masters can add a larger variety of wands to make it strategically challenging and to add a layer of fear.

There is a huge list of wands in the D&D 5e, which are mentioned in the Dungeon Master Guide (herein referred to as DMG). The DMG beautifully illustrates the wands in 5e, highlighting its artwork and aesthetics. The design is important because it hints at the magic that wands carry.

The 5e wands can be classified into five categories based on rarity – Common, Uncommon, Rare, Very Rare, and Legendary. Although some wands’ rarity may vary, it depends on the Dungeon Master and how they may play it out.

The wands can cast various effects and spells, and these wands use charges to cast these spells. The damage done by the wands can vary by the class and type of spell it produces. It should be noted that some wands produce effects that cannot be done by spells. Most of the wands also limit the charges that a wand can use.

What is The Origin of Magic Wands in D&D 5e?

Wands exist in 5e, which means it came from somewhere, right? The lore of magic wands can be established by the player, the Dungeon Master, or both of them. The origin story adds more depth to the game. It also helps the players to expound on how they can craft common wands and other magic items in the game. The origin story can be simple or complex, depending on how players want it.

How to Activate Magic Wands in D&D 5e?

The most basic requirement to use a magic wand is to hold it in your hand. You cannot use a magic wand unless it is in your hand. To activate it, you must spend the action holding the wand. However, the wands do not require you to roll an Arcane check to guess its command spell. It is also not necessary to know the spell within the wand. Wands need to store a spell within them to be activated if the wand does not specify the spell. If the wand does not store a spell, you can activate the wand as long as you are an arcane caster.

Who Can Use Magic Wands in D&D 5e?

Well, it depends. Each magic wand has its requirements for usage. Some D&D 5e magic wands also specifically require “attunement by a spellcaster.” To clarify what this means, this is what is mentioned in the DMG “If the prerequisite is to be a spellcaster, a creature qualifies if it can cast at least one spell using its traits or features, not using a magic item or the like.”

In simple words, if you can cast one spell without the aid of magic items, you can attune to spellcaster-required attunement items like a Druid using druidic forces or Bards using musical instruments. It is also important to note that wands won’t limit the type of spellcasters attuning to them. But it is not limited to just spellcaster classes. You can use wands to cast spells usually available for your class.

Wands can be pretty interesting with different classes since all the different classes use the magic wands differently. For example, Bards use musical instruments as focus. For Clerics and Paladins, the Holy symbols are not inherently compatible with magic wands, and needs would need buy-in from the Dungeon Master.

Do Wands Help in Casting Spells in D&D 5e?

In short, yes, they do! Wands help in casting spells in D&D 5e. Anyone can hold a wand without any penalty if the wands do not store any spells. Although even the wands that hold spells in them can be fine for spellcasting focuses. But that will be up to the Dungeon Master.

If the wand does not say that it requires attunement by a spellcaster it can be considered as using an item to cast the spell. As long as it’s not taking the energy of the user and it is okay to do. If the wand does require attunement by a spellcaster then it uses the magical energy of the user and would not be okay to cast a spell from the wand. It should be noted that some wands are magical in different ways that do not have spells on them.

Can a Player Create a Magic Wand in D&D 5e?

The guidelines and rules for crafting magic wands in given in the DMG. The DMG has a table detailing the cost and time investments. The amount of gold needed to craft a magic wand goes up from Common rarity to Legendary Rarity.

Legendary rarity requires a much higher amount of gold even compared to the Very Rare rarity. To craft a magic wand, you also need to attain a minimum level of crafter level. You also need to keep in mind the number of days required to craft the wands. If you want complete details and check the reference, the DMG contains the requirements for crafting magic wands from pages 128 – 129.

Can You Counterspell a Wand in 5e?

Well, this can be tricky and it will mostly depend on your Dungeon Master. But, there is nothing that explicitly forbids the counterspell from working on a spell from a wand. If the wand performs spell casting, it can be subjected to counterspells too. If a wand has a spellcasting property to it, there is no reason to think that counterspells won’t work on that. Although it is highly recommended that you ask your Dungeon Master.

Can You Use D&D 5e Magic Wands for Various Spellcasting Focus?

As we established earlier, spellcasting focus can be available in various other forms depending on the classes of the characters. Different classes have their spellcasting focuses and are described in their classes’ characteristics in the handbooks.

The fifth chapter of the Player Handbook of the D&D 5e describes some arcane focuses forth Wizards, sorcerers, and Warlocks. The Handbook describes the arcane focus as a specially constructed staff, rod, or wand-length of the wood.

A wand can classify as a wand-length of wood and hence can be used as a spellcasting focus.

Druids as a class can use “druidic focuses” for Druid spellcasting. Druidic focuses are different compared to arcane focuses, but their handbook description similarly mentions that they can be wands or scepters made of yew or special wood.

A wand can be described as a special wood and hence it can be ruled that magic wands can also be seen or used as druidic focuses.

Artificers as a class use their special tools as the spellcasting focus – at level one. Their options expand when they reach the second level. At a higher level, they can use items with infusions as a spellcasting focus.

In this case, wands cannot be described as random items, Artificers can not use wands as a spellcasting focus. It is only possible if DM rules 5e wands as tools.

Clerics and Paladins as a class use holy symbols, and holy symbols are inherently incompatible with magic wands. Although it would be redundant to use wands as holy symbols, they can be used as such if Dungeon Master chooses to. This can be done if wands are considered holy items.

Wand of Binding is a rare 5e wand that requires attunement by the spellcaster. This wand has a total of 7 charges and regains 1d6+1 expended charges at dawn daily. When you expend the last charge of the wand, roll a d20 to save the wand. If you roll 1, the wand crumbles and turns to ash.

You can use the following spells with this wand:

This is a rare class of wand in D&D 5e that requires attunement by a spellcaster. This wand has a total of 7 charges and has the following properties. It regains 1d6+1 expended charges at dawn on daily basis. If you expend the last charge, roll a d20 to save, and if you roll 1, your wand is destroyed. The spell of this wand enables you to detect nearby enemies that may be invisible, disguised, hidden, ethereal, or in plain sight. You have to hold the wand and know the command spell to activate the spell.

The wand is Fear is a Rare class wand that has a total of 7 charges. The spell allows you to command another creature to grovel or fear with the command spell while consuming 1 charge. While you are holding the wand, you can use an action to expend 2 charges and emit a 60-foot cone of amber light. Every creature inside the cone of light becomes frightened for a minute, and while in this state it can’t move freely within the 30 feet of you.

This wand is a rare class wand that is simple to use and very straightforward. This wand has a total of 7 charges, and while holding it you can use an action to expend one charge to cast a fireball. You can expend more than one charge to expend a fireball spell. If you expend the charges, you can roll a d20 to save, and if you roll a 1, your wand will crumble into ashes and get destroyed.

This wand is an Uncommon rarity the wand that does not require any attunement by a spellcaster. The spell of this wand allows you to cast magic missiles from it while expending one charge. For one charge, you can cast the first level of the spell, and the spell slot increases by one for each charge you expend. The wand will regain a 1d6+1 charge daily at dawn, and when your charges are exhausted you will lose it if you roll a 1.

Wand of Wonder is a Rare class of wand that requires attunement by the spellcaster. The wand has a total of 7 charges, and while you hold it, you can use it on target within the range of 120 feet of you. Roll d100 and consult the table below given in the Handbook to know what happens. You can use this spell on any creature, person, object, or point in the space within the range.

The use of 5e wands in the game of D&D can make it more exciting and adds so much depth to the game. The sheer variety of the wands available makes it much more exciting to use them in the game. Wands do cost some significant resources, but they are worth it since it replenishes quite quickly, and their effects are significant in the game. I hope this guide has helped you understand how the wands 5e works and has got you excited to use wands in your next D&D game with your friends.