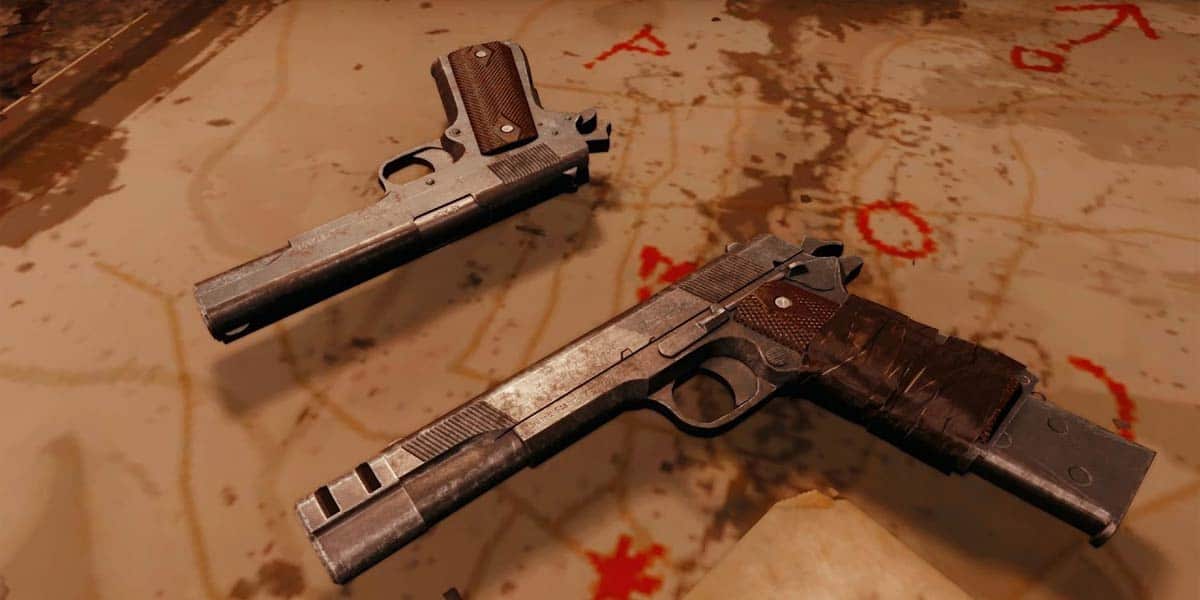 There is no doubt that no matter which game you play, you will always want the best gear. Well, in Fallout 4, things are pretty much the same. The wide variety of choices from pistols to rifles and knives all confuse you and make you wonder which the best possible option is. The uniqueness of some of these is unreal.

Pistols in Fallout 4 are an incredible secondary weapon depending upon what they bring to the table. At times, pistols can be superior to any rifle. So, for these situational moments, you might need the strongest pistol in Fallout 4 to support you. In this article, we have also mentioned how you can get any of these pistols in Fallout 4. For some of them, you will need to complete missions, while you might get others from tier 4 Vendors in your camp.

Here we have 10 of the most powerful pistols in Fallout 4 that range in a variety of different abilities, effects, and situational use. At the end of the day, it all comes down to your own preference and play style.

If you were going to pick between Old Faithful and this weapon, you’d pick the Sentinel’s Plasmacaster without any hesitation. This is because the overall stats of this weapon exceed that of Old Faithful’s with a damage of 138, range of 233, and an accuracy of 184; this pistol is more than just a pistol.

In addition to that, it even has the same ability to deal extra damage to full HP foes. All you need to do to get the Sentinel’s Plasmacaster is finish the Brotherhood of Steel (BOS) New Dawn quest and acquire it from Teagan, who is the BOS merchant.

Now, if you are a fan of laser guns, this is the pick for you. The Old Faithful brings death to its targets with a special effect that deals double damage to any target with full health. It even provides an increased 200% damage as an extra sneak bonus for sneak attacks. There is barely any reason not to get this gun.

Also, you even have the option to turn this amazing pistol into a Sniper rifle. How overpowered is that? Now that you know how well this pistol suits in various situations, you can simply purchase it from the Diamond City.

The Gainer is one of the best pistols in Fallout 4 because it loves to play with fire. We say this because it has the incendiary effect, which allows it to burn its targets on fire for a short amount of time. The gun deals a damage of 50 with a range of 119 and an accuracy of 74. In addition to this, fire damage deals an extra 15 point fire damage.

The Gainer can be found behind a locked door in Vitale Pumphouse, an unmarked spot located in the southern wastelands of Hub City.

To be honest, Eddie’s Peace pistol is an odd one. We say this because it has the scope of a rifle attached to it. The story behind it is that Eddie Winter had this gun with him when he was hiding during the holocaust. That is when he modifies it with the scope and other things.

Although, thanks to him, this weapon now can deal extra 50% limb damage, which, believe it or not, comes in handier than you think. You can find it on Eddie Winter during the side quest called “Long Time Coming for Nick Valentine.”

The Lorenzo’s Artifact Gun is a really weird Gamma gun. This is because it doesn’t do any radiation damage on a hit. However, this gun has a different special effect, which makes it way more fun than any other pistol. When fighting against enemies that are not immune to radiation, this gun can knock them into the air with just one shot.

Simply finish the Jack Cabot quest to get Lorenzo’s Artifact gun as a reward and enjoy knocking people off of high grounds. This is the best pistol in Fallout 4 in terms of fun.

When playing the campaign, you can find the Kellogg’s Pistol pretty early on. However, it is an incredible choice for both newcomers and well-versed players. The Kellogg’s Pistol has the relentless ability acquired, which allows it to refill your AP on critical hits when it comes to VATs.

Even though the pistol has a slower rate of fire and there is no way to silence it, the high damage makes up for both of these disadvantages. This makes it arguably one of the best handguns in Fallout 4.

You simply need to defeat Kellogg and take his pistol to make it your own.

Just as its name states, this weapon can deliver to all your needs. The Deliverer pistol is one of the best pistols in Fallout 4 for a reason. Increased chances of hits in VATs and reducing AP costs are only a few of this pistol’s advantages. Its rate of fire is high, as well as its range, accuracy, and damage.

This gun is overall an elegant yet deadly monster of a pistol. It even has a silencer which is crucial for sneak attacks. Deacon will bestow upon you this gun after you finish the Railroad quest-line.

The Alien Blaster is one of the rarest pistols in Fallout 4. An “Another-Worldly” alien weapon with incredible stats. It is an energy-based weapon with a high fire rate, VATs cost, accuracy, and damage. It can even be further modified with fusion cells with the help of a maxed-out research perk (Check Fallout 4 Perk Guide).

However, it does have a downside, that being, its ammo can only be acquired from the Nuka World DLC by killing the alien that is present near the UFO crash site inside a cave. The Gunslinger and Bloody Mess perks can further improve the weapon’s capabilities.

Now the .44 Magnum is a gun to support the beginners in the early stages of Fallout 4. The pistol holds only a few bullets, it has a slow rate of fire of 6, and even customization options are limited.

However, all of this gets balanced out by the damage that this pistol can deal. Being able to deal 48 damage in the initial stages of the game is a massive advantage.

Additionally, you can find this weapon almost everywhere in the wastelands or possibly purchase it through the commonwealth but, the chances of finding it the most would be in loot crates.

The Zeta Gun is a Gamma gun that can stun its opponents with just one shot. However, it deals a very low amount of damage and no extra radiation damage. This gun’s only plus point is its ability to stun. Now, although this gun is unique, it is not that hard to find.

Hopefully, you could find one of your favorite pistols from the list mentioned above and now have a reliable partner with you on the field to help you get through the tough times. These pistols bring something different that you might need to break that barrier and be free from those shackles.